Barry Hannah was nicer than I thought he would be, sitting behind a messy desk and telling me that my manuscript would be published “as is,” that the editors had requested no changes. He talked in that loop-the-loop way that he wrote, the words making sense, but not making sense. I asked him if I could change the title of my book, which I had submitted as “Stumbling Forward,” and he said that, of course, that would be something we would talk about later. But he had liked “Stumbling Forward,” he said. I wasn’t sure if he was talking about the manuscript or his life.

It was only a dream, but it was the last dream I had before my husband shook me awake and asked me to come have coffee with him. There is no good reason for Barry Hannah to show up in my dreams. I’m familiar with his work and his distinct voice as a writer, just as I’m familiar with his reputation–not always good–outside the classroom. I went to the Oxford Conference for the book (2010?) the year he was to be the central, celebrated author when he died shortly before it took place. I went to the Sewanee Writers’ Conference, but after Mr. Hannah had stopped attending. I listened to him at a conference many years ago, carrying on about the proper way for a writer to ask for a book blurb from another writer, but that’s as close as I ever came to meeting him.

But there he was last night: jovial, weird, maybe a little drunk. The manuscript on his desk, my “Stumbling Forward,” was the same one I mailed in real life yesterday morning, sending it off to be considered by a small press I have long admired and which has grown in reputation of the last few years. I was surprised to learn that I had sent it under the title “Stumbling Forward,” when I had intended it to be the same as what I mailed in real life. What the dream title represented, though, was how I felt over the last few months of writing and editing and re-writing and re-editing, that I was stumbling forward, picking myself and my work up over and over after apparent failure after failure. When I had finally put all the stories together to make the collection, I went back through to do a last edit, marking each page with a bright sticky note. The photo here is what it looked like after that first, big edit. 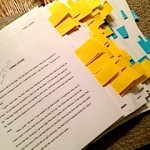 Unfortunately, all those little sticky notes don’t just represent spelling and grammatical errors, but big mistakes, too. They pointed to things like a page full of back story that clearly didn’t belong and was slowing down an otherwise decent story; a set of connected stories in which I changed the name of a character’s hometown half-way through and never noticed. They represented the striking of entire sentences, a few whole paragraphs, the addition of a short, new line here and there. Gratefully, reading the stories together as a whole made these errors stick out in neon in a way they never had when read as separate parts. It was strangely grueling work, going over every last word, watching so closely for mistakes. Editing is not the fun part of writing (if there is a “fun part”), but it’s the necessary, technical aspect that makes good stories the best they can be. And I realize now that it was like stumbling forward, catching myself at the last second only to stumble again. There was such relief putting that manuscript in the mail yesterday. Today is a dayfor catching up on practical matters (laundry, dishes, appointments previously neglected, and preparing for my upcoming class), but already I feel the pull toward the work I put aside to finish the story collection. And tomorrow, I will start on that again, no doubt that I will stumble and stumble all the way to the end.

This site uses Akismet to reduce spam. Learn how your comment data is processed.